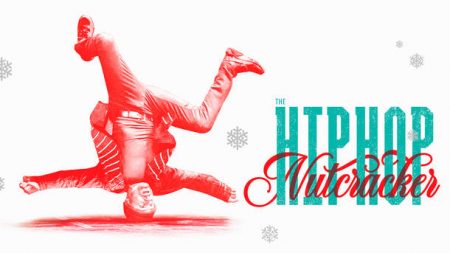 A holiday mash-up for the entire family, The Hip Hop Nutcracker, a contemporary work set to Tchaikovsky’s timeless music, embarks on an international tour on the strength of last December’s sold-out performances of the world premiere at New Jersey Performing Arts Center (NJPAC) and United Palace of Cultural Arts (UPCA) in New York City.

The Hip Hop Nutcracker is an evening-length production performed by a supercharged cast of a dozen all-star dancers, DJ and violinist. Through the spells cast by the mysterious Drosselmeyer, Maria-Clara and her prince, Myron, travel back in time to the moment when her parents first meet in a nightclub. Digital scenery transforms E.T.A. Hoffmann’s story of a palace of sugarplums into a romance set in 1980s Brooklyn. The dance work celebrates love, community and the magic of New Year’s Eve.

The Hip Hop Nutcracker is directed and choreographed by Jennifer Weber, artistic director of the all-female hip-hop crew Decadancetheatre in Brooklyn. It is adapted to today’s New York by Mike Fitelson, executive director of UPCA – the work’s original producer – and includes hip-hop interludes remixed and reimagined by DJ Boo and an on-stage electric violinist.