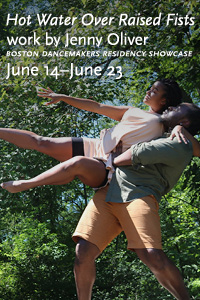 Experience the premiere of Hot Water Over Raised Fists where movement, light, and sculptural elements create a visceral experience of empathy and hope. Sparked to action by the Dakota Access Pipeline (DAPL) protests at Standing Rock and the lead-water crisis in Flint, MI, the collective invites the audience to join the resistance throughout this performance/installation. Performed by Connections Dance Theater and created in collaboration with designer Aja Jackson.

Jenny Oliver is a rising choreographer in Boston whose athletic modern dance works have been presented in various festivals and split-bill programs including: the Collective Thread Festival, HUBWeek Boston, We Create Festival, ArtBeatFestival, MayFair Festival, More Than Moves Festival and most recently at the Museum of Fine Arts.

The Boston Dancemakers Residency is made possible in part by the Aliad Fund at The Boston Foundation and the National Endowment for the Arts.