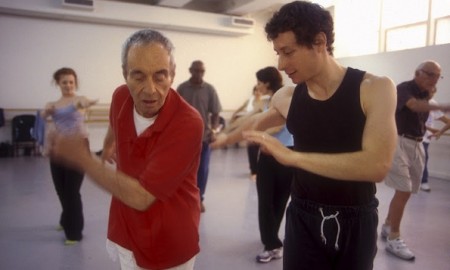 Presented by The Arts and Humanities Initiative at Harvard Medical School
WHERE
TMEC Room 128 260 Longwood Avenue , Boston
WHEN
COST
FREE but RSVP required

David Leventhal will speak about the development and theory behind Dance for PD during this interactive lecture!

David Leventhal is a founding teacher and program director for Dance for PD®, a program of the Mark Morris Dance Group used as a model for classes in more than 300 communities in 25 countries. He leads classes for people with Parkinson’s Disease around the world and trains others around the world to teach in the Dance for PD® approach.

David has co-produced three volumes of a successful At Home DVD series for the program and has been instrumental in initiating and designing innovative projects involving live streaming and Moving Through Glass, a dance-based Google Glass App for people with Parkinson’s. He received the 2018 Martha Hill Mid-Career Award, the 2016 World Parkinson Congress Award for Distinguished Contribution to the Parkinson’s Community, and was a co-recipient of the 2013 Alan Bonander Humanitarian Award from the Parkinson’s Unity Walk.

Leventhal has written about dance and Parkinson’s for such publications as Dance Gazette and Room 217 and has chapters about the program in Moving Ideas: Multimodal Learning in Communities and Schools (Peter Lang), and Creating Dance: A Traveler’s Guide (Hampton Press). David is in demand as a speaker at international conferences and symposiums and has spoken about the intersection of dance, Parkinson’s, and health at the Lincoln Center Global Exchange, Edinburgh International Culture Summit, University of Michigan, Rutgers, Penn State Hershey Medical Center, Brown, Stanford, Columbia, Georgetown, Tufts, Peking Union Medical College Hospital (China), and Centre Hospitalier Universitaire de Liège (Belgium), among others. He serves on the board of the Davis Phinney Foundation and the Advisory Council for the Georgetown Lombardi Arts and Humanities Program. Leventhal designed and currently teaches a pioneering dance-based elective course as part of the Narrative Medicine curriculum at Columbia University’s College of Physicians and Surgeons. David is featured in the award-winning 2014 documentary Capturing Grace directed by Dave Iverson. As a dancer, he performed with the Mark Morris Dance Group from 1997–2011, appearing in principal roles in Mark Morris’ The Hard Nut, L’Allegro, il Penseroso ed il Moderato, and Prokofiev’s Romeo & Juliet, on Motifs of Shakespeare. Leventhal received a 2010 Bessie (New York Dance and Performance Award) for his performing career with Mark Morris. David graduated from Brown University with honors in English Literature