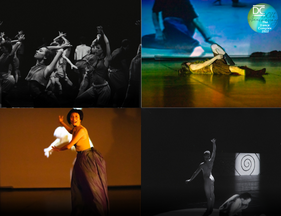 Tony Rizzi and the Bad Habits Performing Before, During and After (working with William Forsythe)

Boston born & trained dancer/choreographer Tony Rizzi along with his company the Bad Habits will perform Before, During and After (working with William Forsythe) a lecture/performance about the Ballet Frankfurt and its legendary director William Forsythe. Set to take place October 28-30, at the Complex @ Canal in Cambridge, these performances are presented as part of The Dance Complex’s DIY Performance Series. Tony Rizzi trained at the Boston Ballet School for 4 years before joining Ballet Frankfurt in 1985, where he became one of William Forsythe’s main dancers & collaborators over the next two decades. Through this lecture/performance, Rizzi will share his experiences working with Forsythe, allowing audiences to gain a deeper understanding of the wide range of works that led Ballet Frankfurt to become a world renowned troupe. Rizzi & his companycontinue that legacy as they interweave stage performance with videos from archival footage of Ballet Frankfurt & The Forsythe Co.