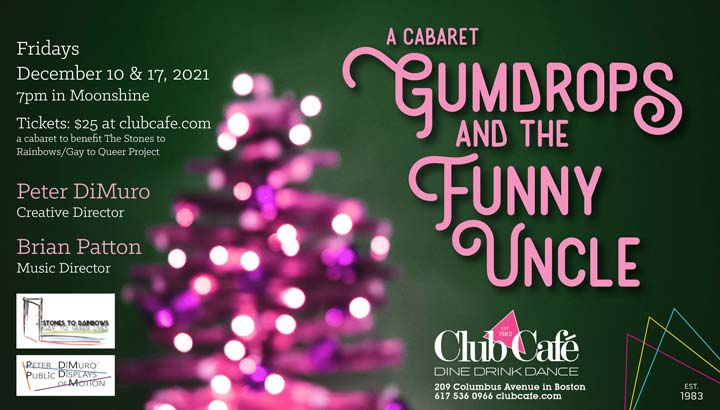 Gumdrops and The Funny Uncle

Peter DiMuro/Public Displays of Motion brings their alternative-family, un-Nutcracker collection of holiday stories and dances to the stage, with songs from the cabaret world and the season. Brian Patton is musical director. Guest stars will include Public Displays of Motion core collaborator Michael Winward, and song stylists – both LGBTQ+ and Straight Allies! – will be announced in the days leading up to performance (Just like an Advent calendar!)

The original Gumdrops & The Funny Uncle debuted in 2002, as performance monologue with dances, combining Peter DiMuro’s experiences playing the Uncle in the Boston Ballet’s Nutcracker, and the stories dealing with his sister’s struggles through a decade of red-tape and Mexican/US politics while trying to adopt her daughter. In both stories he becomes a different kind of Funny Uncle. The work has been performed in multiple variations across the country.